The history of using ultraviolet to disinfect drinking and how it came about.

Many of us have heard of “ulvtraviolet” before, although it would be likely to be in reference to the sun rather than its ability to disinfect drinking water and other fluids. As early as 1877, two British researchers, Downes & Blunt discovered the ability that sunlight had to destroy and provide an effective means of treating bacterial infections. In 1901, Cooper-Hewit's mercury arc invention was revealed to the world, followed by the Quartz-Burner as the first intensive UV source by Mich in 1906. The first fused silica quartz arc tube was developed by a pair of Germans, Kuch & Retschinsky in 1906. They managed to get more light output from a quartz glass tube as compared to standard glass because the quartz glass tube could endure the higher operating temperature related with a higher tube pressure that was required to generate more light output. Quartz was also the ideal choice of material because it was less chemically reactive to the hot chemicals and gases encountered within the lit arc tube. This ultimately led to the first full-scale UV disinfection apparatus by Henri and coworkers in France in 1910.

Today, UV technology is used in virtually every country around the world and is considered the best available technology for treating waterborne microbiological contamination.

The disinfection process and an introduction to the two most common processes, chemical and physical.

One of the most common chemical disinfectants is chlorine, popularly used to disinfect town water in New Zealand. It’s used to control microorganisms in the water which is distributed to the public. The chlorine is simply added to the water and mixed throughout. Although it is effective in destroying the majority of microorganisms, there is free chlorine remaining in the water that was not used. This free chlorine can then bond with other compounds such as organics that may be present in the water. The water now has the potential to smell and taste different, the pH can also change and other various compounds may have formed due to reactions happening in the water.

Physical disinfection is when just the microorganisms are being targeted. There are varied forms of physical disinfection which include, filtration, boiling of the water and ultraviolet disinfection. None of these cause changes to the water, just the removal or inactivation of microorgnanisms. The waters taste and smell remains the same and no new compounds will be formed.

An introduction to the electromagnetic spectrum, what it is and where ultraviolet light sits within this spectrum. 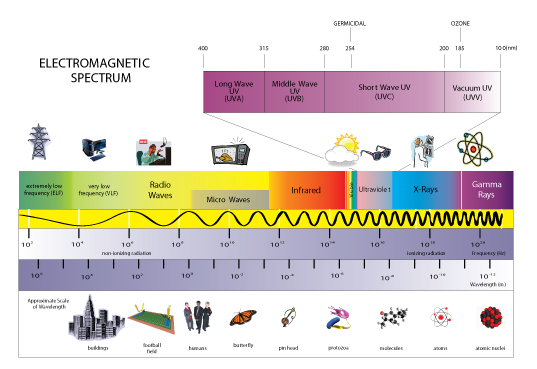 Ultraviolet light is electromagnetic radiation that lies between visible light and x-rays and is comprised of four basic segments. The shorter the wavelength, the higher the energy and as a result, vacuum UV (UVV) lies in the 100-200 nm wavelength. On the opposite end of the UV scale lies long wave UV(UVA) which has the lowest energy output and lies between 315-400 nm. Almost 99% of the sun's output is in the form of UVA energy. Middle wave UV (UVB) have wavelengths between 280-315 nm and have more energy than long wave UV. For disinfection purposes, it is the short wave UV (UVC) that we are most interested in as its wavelength covers 100 - 280 nm which covers the 265 nm optimal wavelength mentioned earlier for microbiological inactivation. 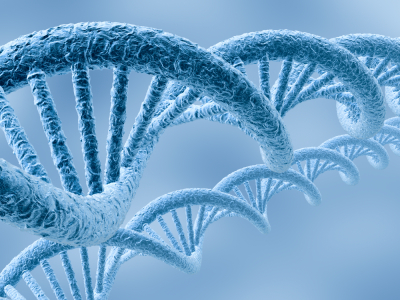 Within a properly designed UV system, the process of disinfection occurs very rapidly within the system. As water runs through a UV reactor it is exposed to the UV light that the lamp gives off causing a genetic change in the microorganisms that are present in the water. This genetic change causes the microorganisms to no longer have the ability to replicate and produce colonies. Keep in mind that the only thing that microorganisms do in life is replicate and make colonies, this is why we get sick if we consume them in large amounts through our drinking water, so microorganisms that cannot replicate are ones that we do not have to be concerned with. These organisms can enter our system and will pass right through without causing any sickness or ailment.

Information about the two common types of UV lights, low pressure and medium pressure and what they are used for.

Low-pressure lamps are monochromatic in nature, emitting their spectral output at a single wavelength. They can be further subdivided into three subgroups:

At Mountain Fresh, all three low pressure lamp technologies are used. In addition, all our lamps are manufactured with a proprietary Long-Life+ coating which provides a consistent UV output over the life of the lamp. Additionally, all our lamps are the most environmentally friendly UV lamps on the market as each lamp contains less than 10mg of mercury (including amalgam) which is up to 30% less than other leading competitors.

Types of microorganisms and the level of UV dose to inactiate each one.

As there are many different kinds of microorganisms that can be found in drinking water there are different levels of UV energy (dose) required to inactivate each one.

For example, E.coli will require a slightly different dose of UV light to inactivate than Cryptosporidium as they are genetically different. The good news is that typical bacteriological contaminants that are found in water are all easily inactivated using UV light. E. coli for example is inactivated at a dose of 6.6 mJ/cm² and both Giardia lamblia and Cryptosporidium are eradicated at dose levels less than 10 mJ/cm². Although UV is effective against all forms of bacteriological contaminants, viruses typically require the highest dose level for complete destruction. In some cases, such as Adenovirus, a UV dose of 165 mJ/cm² is required for inactivation. If you have a specific microorganism needing to be removed from your water supply, please contact us for more information.

The adavantages of using ultraviolet sterilisation to disinfect your water.

The use of ultraviolet light for disinfection purposes has many advantages, some of which are as follows:

Reccomendations for pretreatment of water.

UV sterilisation is an extremely effective treatment technology, however for proper functioning the system, water quality plays a very important role. We recommend the following when it comes to pretreatment:

Concerned about your water quality? Call us today, we can help.


Call Us Email Us Login